Andrew H. Clark is author of Diderot's Part (Ashgate 2008)
and, with the musicologist Keith Chapin, Speaking of Music
(Fordham 2013). He specializes on questions of aesthetics,
physiology, music, and literature in 17th and 18th century
France and Europe. He has published articles in Eighteenth
Century: Theory and Context, Diderot Studies, Méthode!
Revue de littérature française et comparée, and Shark, and
various book chapters and reviews. His current book project
examines visual portraiture and the origin of the modern
novel. Professor Clark teaches in both the French and
comparative literature programs. He is the co-director of the
NY 18th-Century Seminar, vice president of the Faculty
Senate, and chair of the Faculty Salary & Benefits Committee.
He directed the Fordham in France Summer program from
2004 to 2011. 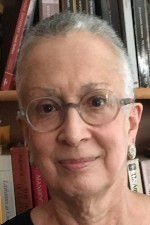 Prof. Anne Hoffman has enjoyed the challenge of working
with talented students in the Matteo Ricci Seminar since its
inception, over ten years ago. Her teaching and research are
interdisciplinary, with a focus on gender and narrative in
nineteenth and twentieth century novels.She holds research
affiliations in psychoanalytic studies at Columbia and Cornell.
Prof. Hoffman publishes in literary and psychoanalytic journals,
as well as in the field of Jewish studies, with a focus on modern
Hebrew literature. She loves to paint and keeps her watercolor
sketchbook close by when she is working at home.