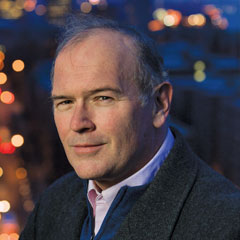 In a four-decade career as a reporter, columnist, and author, Jim Dwyer thrived as a critical conscience of New York City and a passionate celebrant of its residents. Drawn to tales of discrimination, wrongful convictions, and the mistreatment of society’s most marginalized people, Dwyer captured everyday life with novelistic detail, mastering a stylish and impactful form of journalism that brought to light issues of injustice.

A lifelong New Yorker, he learned an uncompromising work ethic from his Irish immigrant parents—Mary, a registered nurse, and Phil, a school custodian. After graduating from Loyola School on Manhattan’s Upper East Side, he enrolled at Fordham on a full academic scholarship, planning to become a doctor. His plans changed in 1976, however, when he and some others stopped to stay with a man who was having a seizure on a Fordham Road sidewalk. When the man recovered, they learned he was a veteran whose seizures dated from his service in Vietnam. Dwyer wrote about the experience for The Fordham Ram, and the article won a national award from the Society of Professional Journalists. He had found a new calling.

At Rose Hill, he also found a lifelong mentor in journalist and communications professor Ray Schroth, S.J., and a lifelong partner in Cathy Muir, a fellow member of the Fordham College at Rose Hill Class of 1979. They were married in 1981, with Father Schroth presiding. After earning a master’s degree from Columbia University’s Graduate School of Journalism, Dwyer worked for several New Jersey newspapers before joining New York Newsday, where he earned two Pulitzer Prizes—one for team coverage of a deadly subway derailment and one for “his compelling and compassionate columns about New York City.”

Following a stint at the Daily News, he joined The New York Times in May 2001 and contributed to the paper’s coverage of 9/11. Dwyer wrote or co-wrote six books, including 102 Minutes: The Untold Story of the Fight to Survive Inside the Twin Towers, a finalist for a National Book Award, and False Conviction, which shows how DNA evidence has exposed miscarriages of justice, including in the case of the Central Park Five. “The more we understand about how things can go so badly wrong,” he once said, “the better we can guard against them happening again.”

Dwyer died in 2020 at the age of 63, but his work and teaching live on in the journalists he mentored and the many readers whose lives he touched with his work. His influence is also felt strongly at Fordham, where young journalists at The Ram, The Observer, and WFUV, in particular, continue to be inspired by his eloquence and moral focus in helping to shape public understanding of the great events of his time.