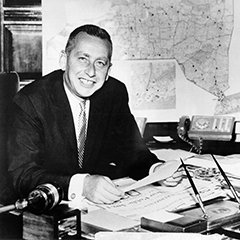 Honorable Malcolm Wilson
Fordham College, Class of 1933
School of Law, Class of 1936
Governor of the State of New York
(Inducted in 2008)

During his distinguished 35-year career in public service, the Honorable Malcolm Wilson used the skills he acquired as a member of the Fordham University debate team and his inimitable eye for detail to fight for the people of New York state. One of his most enduring laws created the Higher Education Assistance Corporation, which made college loans widely available for the first time.

A self-professed “economic conservative” and “human-rights liberal,” Wilson was elected to the Assembly just two years after graduating from Fordham Law in 1936. He enlisted in the Navy in 1943 and oversaw a gun crew on an ammunition ship that supported the D-Day landings at Normandy and Anzio. He spent 20 years in the State Assembly, where he was widely regarded as a consummate parliamentarian, winning respect from both sides of the aisle for his adept political skills and encyclopedic knowledge of legislature and senate rules.

In 1958, he was elected lieutenant governor on a gubernatorial ticket with Nelson Rockefeller. Wilson came to be known, throughout the state, as Rockefeller’s “right-hand man,” and served under him until Rockefeller resigned in 1973, when Wilson finished the governor’s term.

Wilson spent his entire legal career with the White Plains firm that would become Kent, Hazzard, Jaeger, Greer, Wilson & Fay, becoming a partner in 1946. Following his retirement from public office, he served as chairman and chief executive officer of the Manhattan Bank for Savings from 1977 to 1986. In recognition of his years of devoted public service, the state of New York renamed the Tappan Zee Bridge in his honor.

A graduate of Fordham College and the School of Law, Wilson was devoted to his alma mater. He was among the first laymen appointed to the University’s Board of Trustees in 1969. Each year, the Westchester-Putnam Chapter of the Fordham Law Alumni Association presents the Honorable Malcolm Wilson Distinguished Alumnus Award to Fordham Law graduates who carry on Wilson’s lifelong commitment to jurisprudence.