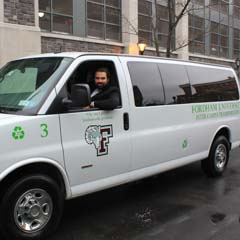 As a department operating nearly 50 vehicles and transporting over 250,000 people annually, the Ram Van plays no small part in contributing to Fordham's carbon footprint.  Since 2008, the Ram Van has also played a proportionally large role in leading Fordham's sustainability makeover.

In 2008, under the leadership of Marc Canton, the Department of University Transportation developed a plan to gradually convert the entire fleet of Ram Vans to biodiesel fuel by 2016. This plan projected to have a net impact of reducing the total ram van emissions by at least 32%, preventing over 340,000 pounds of Co2 from entering the atmosphere yearly.

Today the Ram Van Green Initiative is being executed well-ahead of schedule. The Department of University Transportation currently has 38 biodiesel vans in operation, which have already achieved a 20% decrease in overall Co2 emission. Director Marc Canton expects to add 5 more biodiesel vans which will help the University achieve its goal of acquiring a 100% biodiesel van fleet by 2016.