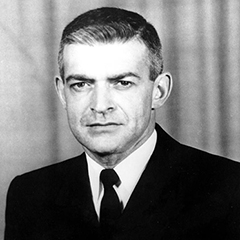 The Rev. Vincent R. Capodanno, Servant of God
Fordham College, Class of 1952
U.S. Navy Chaplain
Recipient of the Medal of Honor
(Inducted in 2014)

Though he never signed on for combat, Father Vincent Capodanno was a Vietnam War hero in the truest sense—a military chaplain who exhibited unparalleled bravery and never left the side of his men.

When Father Capodanno heard the North Vietnamese had ambushed his Marines, he rushed to the scene of the September 1967 battle to be with his troops. When he got to the Operation Swift battlefield in the Que Son Valley, he found the Americans outnumbered five to one. The gunfire was intense. A mortar shell shredded his right arm, yet the chaplain braved the heavy artillery again to drag a hurt sergeant to safety. He quickly moved among the wounded and the dead, praying with the men and giving last rites to his fallen brothers. When he saw a Marine knocked down by a spray of bullets, Father Capodanno stepped between the machine gunner and the injured boy. A burst of gunfire riddled him with 27 bullets, and he made the ultimate sacrifice. He was 38 years old.

Vincent Capodanno grew up on Staten Island, the youngest of 10 children in an Italian immigrant family. After high school, he took evening classes at Fordham while working as a clerk for a Wall Street insurance company. But in 1949, he felt a calling to the priesthood. He trained among the Maryknolls of the Catholic Foreign Mission Society of America, not only in ministry but also in emergency medical care and survival tactics. He was ordained a priest in June 1957.

After posts in Hong Kong and Taiwan, Father Capodanno asked to be sent to the Navy Chaplain Corps so he could minister to the growing number of Marines in Vietnam. He was commissioned a lieutenant in December 1965, and from the start of his service, he insisted on living, eating, and sleeping in the same quarters as the enlisted men, known as “grunts.” For this he become known as the “Grunt Padre,” keeping watch with these young men through the night in their dangerous, remote posts, sharing his rations with them, and hearing their confessions—whether they were Catholic or not. He refused to leave the side of any dying Marine, lest he die alone. The day after Father Capodanno’s death, his regimental commander received a letter from the chaplain. “I humbly request that I stay over Christmas and New Year’s with my men,” the priest had written before his death. “I am willing to relinquish my thirty days leave.”

In the 2000 book The Grunt Padre, a former Marine remembered Father Capodanno coming to him as he lay wounded on the battlefield. “A peace came over me that is unexplainable to this day,” the Marine said. “In a quiet, calm voice, he cupped the back of my head and said, ‘Stay quiet, Marine. You will be OK. Someone will be here to help you soon. God is with us all this day.’”

Father Capodanno was awarded the Medal of Honor posthumously in January 1969 for “conspicuous gallantry and intrepidity at the risk of his life above and beyond the call of duty.” He also received a Purple Heart and a Bronze Star posthumously. Fordham proudly inscribed his name on the Vietnam War Memorial in the University Church.

In 2006, the Archdiocese for the Military Services declared him a Servant of God, formally initiating the cause for his beatification and sainthood.