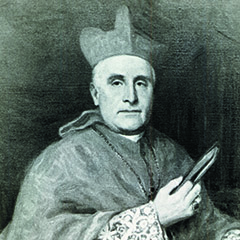 At an early age, John Murphy Farley set forth on a path of religious and spiritual development that would take him from his boyhood home in County Armagh, Ireland, to the archdiocesan seat of St. Patrick’s Cathedral, where he strengthened the foundations of Catholic education throughout New York City.

After his family immigrated to New York, Farley enrolled at Fordham University, then known as St. John’s College, where he complemented a preternaturally keen grasp of the catechism with the College’s core curriculum—the Jesuits’ ratio studiorum. Ordained to the priesthood in 1870, he held a number of pastoral and administrative positions until 1884, when he was appointed pastor of St. Gabriel’s Church in Manhattan’s West Village. While there, he established the parish’s first school, which earned a reputation as a paradigm of Catholic education.

Appointed archbishop of New York in 1902, Farley continued the tireless work of his predecessors, adding more than 40 parochial schools and establishing the seminary at Cathedral College. In 1911, he was elevated to the College of Cardinals by Pope Pius X. When Fordham announced its plans to establish a graduate school of education in Manhattan five years later, in 1916, Farley championed the school as a way to promote the advancement of a Catholic professional class.

Cardinal Farley’s heraldic device, bearing the motto Non nobis, Domine (“Not to us, Lord [but to You, give glory].”), is on display high above the altar of the University Church—an appropriate setting for a man whose pastoral work promoted Catholic education throughout the Archdiocese of New York.