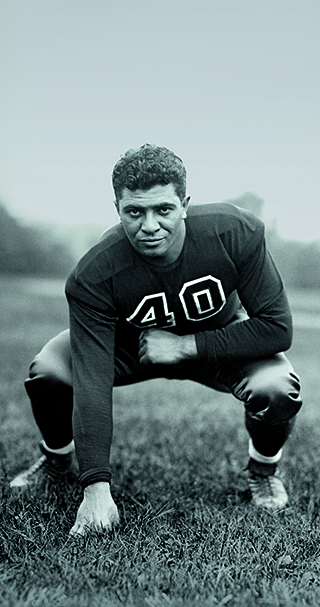 In 1933, Vince Lombardi came to Fordham with a football scholarship in hand and a Brooklyn-sized chip on his shoulder. At five-foot-eight and 185 pounds, the stocky but undersized kid from Sheepshead Bay was determined to make an impression on the gridiron. Little did he know how lasting this impression would be.

Lombardi’s hard-nosed style of play, coupled with his infectious enthusiasm for the game he so evidently loved, quickly endeared the young undergraduate to Fordham Coach “Sleepy” Jim Crowley, who anchored Lombardi to the Rams’ imposing front line, the famed Seven Blocks of Granite. Behind this unit, the Rams dominated college football and were a fixture at the top of the Associated Press’ popular weekly poll, which first appeared in 1936, Lombardi’s senior year.

As an assistant coach for the United States Military Academy at West Point, Lombardi further developed his football acumen under legendary head coach Colonel Red Blaik. Blaik’s emphasis on execution—combined with the Jesuit philosophy of duty, responsibility, and the exercise of free will Lombardi learned at Fordham—greatly influenced the future Hall of Famer’s approach to the game. In 1958, Lombardi was named head coach and general manager of the Green Bay Packers. Within three years, he guided the Packers to the first of the team’s five league championships, including victories in the National Football League’s first two Super Bowls, in 1966 and 1967. Later that year, he received Fordham University’s highest honor, the Insignis Medal, for being “a great teacher.”

He was inducted into the Fordham Athletics Hall of Fame and into the Pro Football Hall of Fame in 1971. He is widely considered the greatest coach in the history of the game.