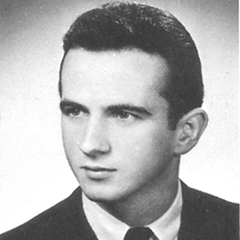 Robert Murray distinguished himself as a leader among men early in his short life—a distinction he would carry through to his last breath, in Vietnam, at the age of 23. He is a recipient of the nation’s highest decoration—the Medal of Honor.

One of six children in a devout Catholic family, Murray spent his early years on Marion Avenue in the Bronx, a stone’s throw from the Rose Hill campus. As a child, he went to Mass and grammar school at Our Lady of Mercy Church, an old parish whose first home was Fordham’s own University Church. Soon Murray was making the short trek down Fordham Road to Fordham Prep, where he served as a class officer all four years and graduated with honors in 1964. He went on to study at Fordham College at Rose Hill, earning a Bachelor of Arts degree in 1968. Murray entered Harvard Business School the following year, but left early to join the Army. At a dinner in his honor before he left for training, he told a friend that he wanted to be as prepared as possible for his service in Vietnam, and that he thought he could make a difference.

Though he had the option to join a non-combat unit, Murray chose to volunteer for Ranger combat training. On June 7, 1970, Staff Sergeant Murray was serving as a squad leader with Company B, searching for enemy mortar near the village of Hiep Duc in Vietnam. When a member of the squad tripped an enemy grenade rigged as a booby trap, Murray shouted for his men to take cover. “Instantly assessing the danger to the men of his squad,” his Medal of Honor citation reads, “Staff Sgt. Murray unhesitatingly and with complete disregard for his own safety, threw himself on the grenade absorbing the full and fatal impact of the explosion. By his gallant action, he prevented the death or injury of the other members of his squad.”

Vice President Gerald R. Ford presented the Medal of Honor to Murray’s family at Blair House in Washington, D.C., in August 1974. “It was just like Bob to die for his men,” his mother said at the time. “He was always so worried about them.” Murray was also posthumously awarded the Purple Heart. He was inducted into the Fordham University ROTC Hall of Fame in 2014, and his name is inscribed on the Vietnam War Memorial in the University Church.

At the memorial’s dedication ceremony in 2013, Joseph M. McShane, S.J., president of Fordham, said that in honoring those who, like Murray, made “the supreme sacrifice,” the University community prays that the losses suffered in Vietnam “will be forever remembered by future generations of Americans who value the cherished gift of democracy that is found in genuine peace and lasting freedom.”