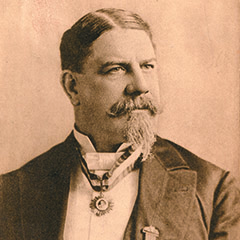 General James R. O’Beirne
St. John’s College, Class of 1853
Provost Marshall of Washington, D.C., at the death of President Lincoln
Recipient of the Medal of Honor
(Inducted in 2008)

General James R. O’Beirne had two great loves: his country and his University. At Fordham University’s 1853 commencement, O’Beirne, as valedictorian, celebrated his time at Rose Hill and exhorted his classmates to honor both their country and their alma mater. Later, during the Civil War, O’Beirne would betray Fordham’s pride of place when he brought coffee and Irish stew to captured former classmates who were serving in the Confederate Army.

Like many Fordham students at the time, O’Beirne joined the 7th Regiment before joining the 37th New York Regiment, the famed “Irish Rifles,” to fight with the Army of the Potomac in the Peninsular Campaign, Major General George B. McClellan’s unsuccessful 1862 attempt to capture Richmond, Virginia, for the Union.

For having “gallantly maintained the line of battle until ordered to fall back” at Fair Oaks, O’Beirne was awarded the Congressional Medal of Honor. In 1863, he was seriously wounded at the battle of Chancellorsville, lying on the battlefield for three days—shot through the right lung, with a bullet hole in his leg and a shell wound to his head. After recovering, he was made provost marshal of Washington, D.C., and took part in the pursuit that led to the capture of John Wilkes Booth, President Lincoln’s assassin. O’Beirne was officially in charge of protecting the president’s deathbed, the last of those engaged in that duty.

After the war, General O’Beirne was appointed deputy U.S. marshal and later register of wills in Washington, D.C. He was for many years a Washington correspondent of The New York Herald and editor of the Washington Gazette. In 1890, he left Washington to become U.S. commissioner of immigration at the Port of New York, which included administration of the historic Ellis Island Immigration Examination Station. His return to New York City allowed him to visit Rose Hill on many occasions, where he impressed Fordham students with his “manly beauty ... enhanced by a grandeur of soul.”