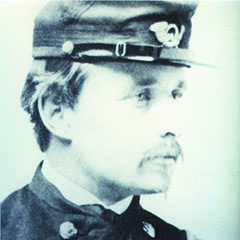 Of all of Fordham’s heroic military sons and daughters, perhaps none acted as courageously or valiantly as Colonel Robert Gould Shaw, the commander of the historic 54th Massachusetts Regiment during the Civil War.

Born into a wealthy Boston family, Shaw attended the second division of St. John’s College, now known as Fordham Preparatory School, after his family moved to New York in 1847. Later, as Southern states began to secede from the Union, he joined the 7th New York Infantry Regiment and marched with it to the defense of Washington, D.C., in April 1861. The following year, he joined the 2nd Massachusetts Infantry as second lieutenant and was promoted to captain following the Battle of Antietam.

For his demonstrated leadership and bravery in battle, Shaw was asked to raise and command an entirely black regiment out of his home state of Massachusetts, one of the first official regiments of black troops in the U.S. military, which he led with distinction. (The 1989 film Glory dramatized the real-life story of the 54th Massachusetts Regiment and starred another Fordham graduate, Denzel Washington, FCLC ’77.) Shortly after taking command, Shaw learned that his men would receive less money for their service than their white counterparts. Shaw won over his regiment when he forfeited his own pay until the inequity was rectified.

On July 18, 1863, along with two brigades of white troops, the 54th stormed the heavily guarded Fort Wagner, just outside of Charleston, South Carolina. As Shaw and his regiment fell under heavy fire, Shaw shouted, “Forward, Fifty-Fourth!” and led the charge against the fortification. Although Shaw was killed in battle with his men, his and his regiment’s bravery were immortalized by William James, who wrote, “In death as in life, then, the Fifty-Fourth bore witness to the brotherhood of man.”