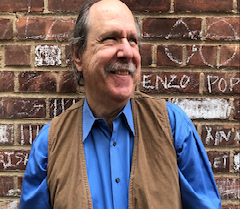 His short stories have been nominated for Nebula, Hugo, Edgar, and Sturgeon Awards. Paul Levinson appears on “The O’ReillyFactor” (Fox News), “The CBS Evening News,” “News Hour with Jim Lehrer” (PBS), “Nightline” (ABC), and numerous national and international TV and radio programs. He reviews the best of television in his InfiniteRegress.tv blog, Paul Levinson, PhD, is Professor of Communication & Media Studies at Fordham University in NYC.  His nonfiction books, including The Soft Edge, Digital McLuhan, Realspace, Cellphone,  New New Media, McLuhan in an Age of Social Media, and Fake News in Real Context have been translated into 15 languages. His science fiction novels include The Silk Code (winner of the Locus Award for Best First Science Fiction Novel of 1999), Borrowed Tides, The Consciousness Plague, The Pixel Eye, The Plot To Save Socrates, Unburning Alexandria, and Chronica.  He appears on CBS News, CNN, MSNBC, Fox News,  the Discovery Channel, National Geographic, the History Channel, and NPR.  His 1972 album, Twice Upon A Rhyme, was re-issued in 2010, and his new album, Welcome Up: Songs of Space and Time, was released in 2020.

How to Find Truth in this Untruthful World