Elucidating the Epigenetic Map for kcc2 in Zebrafish 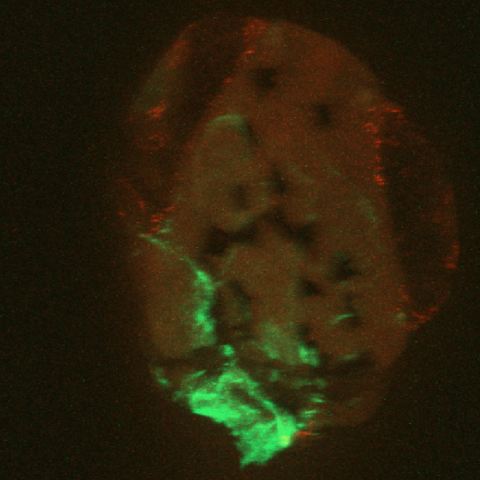 Although all neurons are initially excitatory, inhibitory neurons are established once there is a switch in the function of GABAergic and glycinergic neurotransmitter receptors from excitatory to inhibitory. This inhibitory function is moderated by the activation of the KCC2 gene, which expels Cl- from neurons, hyperpolarizing the cell. We know what KCC2 is and how it functions in cell culture, but not how it becomes activated in in vivo. Zebrafish make a great model for studying this because we can test for KCC2 function in spinal neurons and determine the epigenetic marks associated with the gene.

Epigenetics, the study of changes in gene expression that do not involve the modification or alteration of the underlying DNA sequence itself, is an important concept for this research project. Inside the nucleus of a cell are chromosomes, thread-like structures composed of DNA that is coiled and wrapped around histone proteins. Whether a segment of chromatin containing genes is relaxed and ready for activation or condensed and inhibited is influenced by epigenetic marks, also known as chemical tags, that are bound to either the resident histones or to the DNA structure. How the chromatin is marked by these tags influences a genes’ willingness to promote gene activation. For example, a surplus of methyl groups condenses the chromatin, suppressing transcription, while an abundance of acetyl groups primes the chromatin for transcription and activation. The topic of epigenetics is especially important to this project because evidence shows that experiences and environmental factors may contribute to epigenetic changes that could turn genes on or off and influence behavior. We believe that the activation of the KCC2 gene is arbitrated by epigenetic marks that undergo changes from a repressive state to a stimulated and activated state. Currently, we have pinpointed the precise time at which kcc2 is turned on in spinal cord neurons and in using chromatin immunoprecipitation (ChIP) assays, we have found differences in epigenetic methylation marks in the kcc2 gene just before and after it is turned ON.

Conducting this research project is not just about what is happening at the molecular level, but also about how all factors manifest in behavior involving the spinal motor neurons. Understanding the role that the KCC2 gene has on inhibitory neurons and inhibitory function can lead to further advancements in research and medicine concerning diseases involved with such inhibition, such as epilepsy.