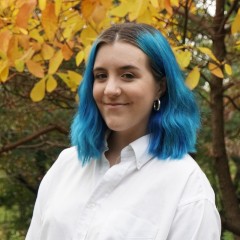 Title of Research: Solitary Desire: The Lonely Lesbian and Narrative Isolation in Diderot's Fiction
Mentor: Dr. Andrew Clark
Abstract: The representation of lesbianism in eighteenth-century French literature has no shortage of scholarly investigation. Scholars such as Elizabeth Susan Wahl and Terry Castle have examined the erasure of female homosexual desire through the derealization and illegitimization of lesbian literary relationships. Within Diderot Studies in particular, scholars like Erica Rand and Eve Kosofsky Sedgwick have focused on the way communities of women and female intimacy in Diderot’s fiction and art criticism function simultaneously as symbols of eroticism and as threats to male dominance. However, there has yet to be adequate inquiry into the lesbian on her own; none of these works have addressed the question of how the lesbian exists in literature apart from these social communities, wherein she has up until now only been visible. While Castle and others have certainly considered, for example, Suzanne’s intangible and unrealizable homosexual tendencies in Diderot’s La Religieuse (begun 1760, published 1796), her desires are consistently confronted in the context of her community or her relationships—never has a scholar properly considered the lesbian character’s relationship to herself, by herself, and the way in which narrative structure creates and complicates this selfhood. A deeper understanding of what I will call the lonely lesbian, and the way in which her selfhood is both constructed and denied by literary narrative, is essential for a nuanced and modernized appraisal of the 18th-century lesbian character—one that does not confine her to erotic community connotations, but highlights her complexity and personhood within itself. Through a close analysis of Diderot’s works of fiction—primarily La Religieuse and Les Bijoux Indiscrets (1748), I intend to show how the lesbian literary figure is at once isolated and validated by her desires, and how self-narration both highlights her loneliness and strengthens her selfhood.