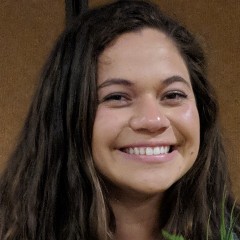 Major: Natural Science
Bio: I am a Natural Science major from Orange County, California. I currently work in the Hobert Lab at Columbia University where I am doing research in evolutionary neuroscience and connectomics. My goal is to earn a Ph.D. in molecular neuroscience or a related subject.

Title of Research: Connectomic comparison of P. pacificus and C. elegans anterior nervous system structure
Mentor: Dr. Jason Morris
Abstract: Generating connectomes can lead to an increased understanding of how nervous system structure and connectivity can dictate behavior. To expand upon this growing body of knowledge, here we use connectomics to describe how the nematode nervous system has evolved by comparing the divergent nematode species P. pacificus and C. elegans. As the complete connectome of C. elegans has already been established, we reconstruct serial-section electron micrographs (EM) to generate volumetric reconstructions of multiple P. pacificus samples. We extend our analysis of P. pacificus nervous system ultrastructure beyond the pharyngeal (Bumbarger et al 2013) and amphidial (Hong et al 2019) circuits to include the complete nerve ring and surrounding anterior nervous system. We have completed our reconstruction of these samples, and find the overall structure of the nervous system is conserved, and we can unambiguously identify all neurons whose cell bodies are present within these EM series. Through embryonic lineaging, we observe only one difference in neuron number. Despite a gross anatomic similarity, approximately 20% of neurons are structurally different between species. These differences (examples in parenthesis) include axonal extensions (ALM), axonal absences (AVM), somatic protrusions (ASJ), dendritic absences (URB), somatic dislocations (IL2), and local branching (RIS). Beyond structural differences at the neuron level, we explored whether fundamental aspects of neighborhood formation, as described by Brittin et al 2021 and Moyle et al 2021, are conserved across species. We find that the set of individual neuronal adjacencies differ between species, leading to a more lateralized partitioning of left-right homologous neurons into distinct groups. Together, our results suggest the nerve rings of P. pacificus and C. elegans are structurally more different than what is seen across development or between the sexes. We continue to analyze our results in the context of synaptic connectivity, behavior, and molecular markers.