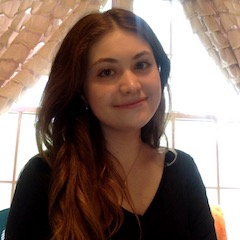 Major: Natural Science
Bio: I grew up in Northern New Jersey and I am currently a junior majoring in Natural Science on a pre-health track at Fordham University. I plan on applying to dental school in the near future to become a dentist.

Title of Research: Determining how “eco-friendly” ionic liquids impact aquatic species behavior using zebrafish as a model
Mentors: Dr. Alma Rodenas-Ruano and Dr. Marie Thomas
Abstract: Cellulose, the most abundant bio-renewable polymer, is currently used to produce everyday products such as clothing, cosmetics and pharmaceuticals. However, the chemical composition of cellulose makes it extremely difficult to break down. Ionic liquids have become solvents of choice for processing cellulose, as they are considered to be more environmentally friendly alternatives. However, evidence using aquatic species indicates ionic liquids are more toxic than previously believed. For instance, studies have shown that toxicity of ionic liquids is not dependent on concentration alone, instead cation structure and increased alkyl chain lengths play a huge role in the toxicity of ionic liquids. To date, most studies have focused on understanding whether ionic liquids increase mortality. Our lab is interested in understanding the impact ionic liquids have on behavior and neuronal function on live vertebrate species. We aim to do this by testing its negative impact on species vulnerable to seepage, such as aquatic organisms. For our study, we used zebrafish as a model organism to test three ionic liquids based on their difference in chain lengths and cation structure. We exposed zebrafish at embryonic stages and tested the impact of ionic liquids on mortality, behavior, and neuron structure. Preliminary data shows that 1-methyl-3-octylimidazolium chloride (OMIM/Cl) is the most lethal and most harmful in terms of behavior and 1-ethyl-3-methylimidazolium dimethyl phosphate (EMIM/DMP) is the least toxic in terms of lethality and behavior. A deeper understanding of how ionic liquids can negatively affect live species will allow industries to make better choices on when and how to use these powerful solvents.