Aug. 10, 2020 Update Fordham Forward, the plan to resume in-person teaching and learning on Aug. 25, is available below, along with extensive resources for students, parents, faculty, and staff. Full Details 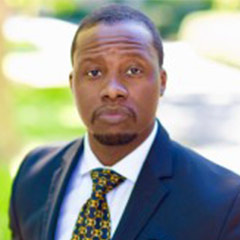 Chief among Professor Ball’s academic and professional accolades is an Emmy Award given by the National Academy of Television Arts and Sciences in the Historical Cultural Programming category. The award-winning documentary, produced with PBS, focuses on the African-American experience in the state of Tennessee during the antebellum and post-bellum periods in the South.

Professor Ball started his academic career at Tennessee State University as an assistant professor in the communications department. While there, he won the American Forensics Association’s Best New Coaches Award and worked as an associate producer/researcher for Nashville’s PBS affiliate, Nashville Public Television. He came to Fordham University as a clinical assistant professor in January 2014 and has made it his mission to enrich the educational experiences of Gabelli School of Business students. In addition to his teaching responsibilities, Professor Ball is the faculty liaison to minority males for Fordham’s office of STEP/CSTEP, a New York State program designed to prepare minority and economically disadvantaged students to advance in career fields where they are underrepresented. He also coached the winning team of the Gabelli School’s 2015 Consulting Cup, a public speaking competition for all members of the sophomore class.

In general, Professor Ball’s academic approach eschews the notion of minority academic inferiority and replaces it with the notion of pedagogical asymmetry. He developed his research agenda while in graduate school at Michigan State, extending a prior emphasis on research that has an impact on inner-city minority males and contributes positively to communities. Using qualitative methods, he conducted useful studies and engineered social interactions between minorities and majority students at Big Ten Institutions. His research at MSU was so well-respected that it was presented to the then-U.S. Secretary of Education, Margaret Spellings, to help the White House better understand the minds of African American students as they transition from the K-12 education system to large state universities. During his time at Michigan State, Professor Ball won two Michigan Broadcasters Association awards, worked with the Big Ten Network, covered Barack Obama’s visit to the university, and anchored MSU’s broadcast of the 2008 Presidential election.

As a competitive speaker and speech coach, Professor Ball has won 186 awards. He is a two-time national first-place champion in Aristotelian forensics and a three-time international first-place champion in public speaking and oral interpretation. He belongs to the New York chapter of Young Professionals and has been active in that organization since 2011, beginning in the Nashville chapter. He also has coached students at various universities to win a total of 364 local, regional, and national speaking awards.