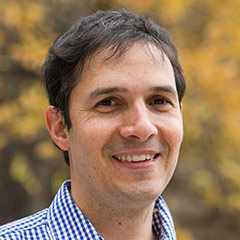 Santiago Mejia joined the Gabelli School in 2017 as an assistant professor in the law and ethics area. He earned his PhD in philosophy from the University of Chicago in 2016. Professor Mejia has a strong background in philosophy and ethics. His research interests span normative ethical theories of businesses, organizational behavior, moral psychology, and virtue ethics.

Professor Mejia's research is concerned with the nature of ethical development and self-transformation. In particular, he has focused on exploring the role that self-examination and self-knowledge play in the development of virtue. His research brings together empirical results from social psychology, cognitive science, and clinical psychology with theoretical insights of virtue ethicists.

Since he started working at Fordham, he has been using his research on moral psychology to engage with the business ethics literature, in particular to the work being done in organizational behavior and virtue ethics. Professor Mejia is also interested in exploring the way in which different normative theories in business provide a sound ethical grounding. In connection with this, he has contended that certain forms of shareholder theory are ethically defensible but that these impose high moral demands on shareholders.

Professor Mejia won the Society of Business Ethics Founders' Award in 2016 and received two teaching awards at the University of Chicago in 2012 and 2015.