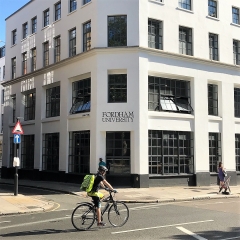 Fordham London offers a variety of courses taught by local and international faculty who are experts in their fields– to help you progress with your degree, and, at the same time, to challenge and to inspire you, to take you out of your comfort zone and to invite you to explore ideas and subjects you may not have thought interest you. Faculty invite guest speakers and take students on-site visits using "London as the classroom."

*Please note the information listed below is for undergraduate courses only and not all are offered every term. Please refer to the registration information you receive from the International and Study Abroad Programs Office for the list of classes and schedule available for your specific study abroad program and term in London. Please consult with your academic advisers regarding satisfying major, minor, and core requirements.