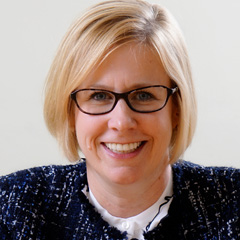 Elizabeth S. Zeigler is the first woman to lead a global fundraising consulting firm in the multibillion-dollar nonprofit services industry. She was named CEO of Graham-Pelton Consulting in January 2017, succeeding company founder Craig J. Leach after more than two decades at the helm.

Described as a rare strategic thinker and communicator with executive-management skills second to none, Zeigler’s efforts have enabled Graham-Pelton to play a groundbreaking role in elevating the level and understanding of philanthropy worldwide. An engaging speaker, Zeigler has also become a leading voice globally on the emerging role of women in high-impact philanthropy.

Zeigler joined Graham-Pelton in a self-designed part-time role in 2001 and quickly rose through its ranks. She earned a reputation among her clients for spotting opportunities others missed and for helping them reach heights previously thought to be unattainable.

Zeigler has provided executive management and counsel to select clients including Stony Brook University; the U.S. Military Academy at West Point; the Jewish Theological Seminary of America; the Conquer Cancer Foundation of the American Society of Clinical Oncology; the Madeira School; the Virginia Military Institute; Christ’s Hospital (the Bluecoat School, UK); Magdalene College, University of Cambridge; and the American University in Cairo.

Before joining Graham-Pelton, Zeigler was director of individual giving at Fordham University
for four undergraduate colleges and five graduate schools during a $150 million fundraising campaign. She led a team that nearly doubled Fordham’s alumni participation rate while securing major gifts for the campaign. She also served on the development team at Muhlenberg College early in her career.