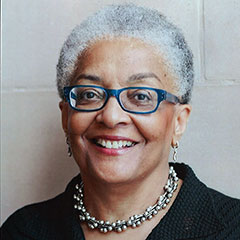 When her son Keith entered Fordham as an undergraduate, Frances Reid saw an opportunity to contribute to diversity initiatives at the University. A lifelong reader, she knew the power of books to welcome readers into the unfamiliar, and her belief in the importance of cultural interrelatedness led her to establish the Reid Family Writers of Color Reading Series. She describes it as “a way to expose students to voices that they might not know of firsthand.”

Since 2008, the series has hosted readings, master classes, and panel discussions at Fordham featuring some of the country’s most celebrated writers of color, including Lynn Nottage, James McBride, Robin Coste Lewis, and the 2019 Reid Writer, Kiese Laymon. Beginning in the English Department, the series now crosses all disciplines at the University. High school students attend many of the events. As Reid says, “I felt it was important for them to know that they too can walk through the gates to Fordham University, feel that college is an option, and maybe hear their lives represented.”

Born in Jackson, Mississippi, and raised in Atlanta, Reid attended Catholic schools through 12th grade. She graduated from Georgia State University in 1973, and in 1977, a year after marrying, she and Kenneth Reid moved to Berkeley, California. Reid’s volunteer work centers on literacy and the arts for underserved communities, most recently as director of the library at a Catholic elementary school.

Keith, a graduate of Fordham’s Gabelli School of Business, is now a sergeant in the U.S. Army and is stationed in Vicenza, Italy. In addition to establishing the Reid Writers Series Endowment, Frances and Kenneth Reid have endowed scholarships at their alma mater, Georgia State University, and at those of their other two children, the University of Pennsylvania and the University of Virginia.