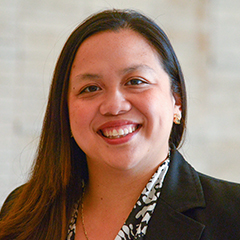 Roxanne De La Torre is the director of campus and community leadership for Fordham University’s Center for Community Engaged Learning. Born and raised in Queens, De La Torre is the first-born daughter of Filipino immigrants. She received her bachelor’s degree from Fordham University, with a focus on communication and media studies and theology. While an undergraduate, she was an avid participant in the mission and ministry programs, and she credits those experiences at Fordham with helping to strengthen her social conscience.

She earned a master’s degree from Fordham’s Graduate School of Religion and Religious Education, where she concentrated on youth and young adult ministry and engaged in advanced research on the intersection between young adult spirituality and social justice. In 2011, as a volunteer with the Cabrini Mission Corps, she served as a missioner for the Wolfington Center for Service and Justice at Cabrini College, supervising students engaged in service and social action in the greater Philadelphia area. She also served as the chief staff adviser for the Cabrini Chapter of the Catholic Relief Services Campus Ambassadors in leading students in social justice and advocacy efforts.

In 2012, De La Torre accepted a two-year assignment with the Jesuit Volunteer Corps as a teacher, basketball coach, and guidance counselor at St. Peter Claver High School in Dodoma, Tanzania. Following her return from Africa, she was a residence campus minister for social justice at St. John’s University in Jamaica, New York.