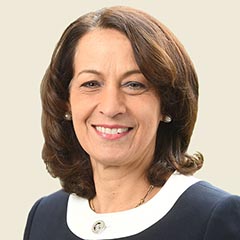 Susan Conley Salice, FCRH ’82, worked in the business sector for 18 years. She spent the last ten at Diversified Investment Advisors, where she served as vice president and led the new client group. Since then her focus has shifted to philanthropy; she is now the director of Magis Philanthropy and oversees the Salice Family Foundation.

Susan is a member of Fordham University's Board of Trustees and co-chair of Faith & Hope | The Campaign for Financial Aid. She is also a board member at several institutions, including the Catholic Charities of the Archdiocese of New York, Endicott College, and Greenwich Hospital. As a board member of the Windward School, she served as co-chair of the school’s first capital campaign, which funded a new campus in New York City. Susan is also the director at Helping Hands for the Homeless and Hungry, a small nonprofit organization in Westchester, New York. She is a member of the United Way Women’s Leadership Council of Westchester, and she sits on the Fashion Advisory Board at Marist College. She has served on the board of the Harvey School and the Rwanda Education Project (REAP), and she has been active in event planning for numerous nonprofit organizations.

Susan earned a master’s degree in fundraising and philanthropy from New York University and a bachelor’s degree in psychology from Fordham University. She is a 2010 graduate of Leadership Westchester.

Susan and her husband, Tom (a fellow Fordham grad), reside in Rye, New York. They have three daughters: Sarah, a graduate of Marist College; Regina, a graduate of Endicott College who is currently pursuing a Master of Social Work on Fordham’s Westchester campus; and Bridget, a junior at the Ohio State University.