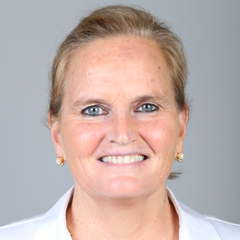 Stephanie Gaitley is the head coach of the Fordham women’s basketball team. She enters the 2018–2019 season as one of the top 20 winningest active coaches in the NCAA. Last season saw her Fordham Rams win 24 games and earn a bid to the prestigious WNIT postseason tournament, where they advanced to the Sweet 16. She also earned her 600th career victory last season and reached a total of 144 wins at Fordham for an average of 20-plus wins per season over her seven-year tenure at the University. During that time, she has led the Rams to five postseason bids.

The 2017–2018 Rams’ greatest accomplishment is one that underscores Gaitley’s longtime commitment to being an educator and mentor to her student-athletes: The team earned a much-coveted spot on the Women’s Basketball Coaches Association’s Academic Top 25 Team Honor Roll, placing 24th in the country with an average GPA of 3.464. Throughout her 32-year coaching career, Gaitley has encouraged student-athletes to be the best they can be, both on the court and in the classroom. It’s a philosophy that dates back to her playing days at Villanova, when she was named to the CoSIDA Academic All-America Team.

Gaitley and her husband, Frank, have three boys who are all involved in the game: Dutch, the oldest, is an assistant coach for the Charlotte Hornets; DC, a 2015 Fordham graduate, was a four-year walk-on for the Rams and is now the director of the Ocean City Hoops Camp; and Jordan, a 2017 Fordham Prep graduate, is a walk-on for the Richmond Spiders.