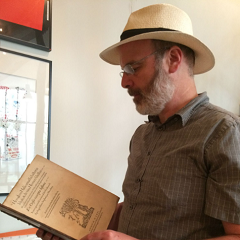 Scott G. Bruce is a historian of religion and culture in the early and central Middle Ages (c. 400-1200 CE).  He earned his Ph.D. in History at Princeton University (2000).  His research interests include monasticism, hagiography, and the reception of classical and patristic traditions in medieval Europe.  He has written several books on the history of the abbey of Cluny.

(with William Tanner Smoot) “The Social Life of an Eleventh-Century Shrine in the Miracula Maioli (BHL 5186)” Journal of Medieval Monastic Studies 12 (2023), forthcoming.

(with Steven Vanderputten) A Companion to the Abbey of Cluny in the Middle Ages, Brill’s Companions to European History 27 (Leiden: Brill, 2022).

Cluny and the Muslims of La Garde-Freinet: Hagiography and the Problem of Islam in Medieval Europe (Ithaca and London: Cornell University Press, 2015; paperback edition, 2020).