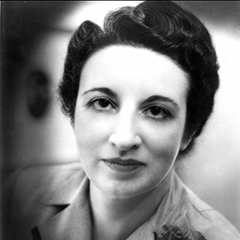 If Sigmund Freud is popularly known as the father of modern psychology, then Anne Anastasi, Ph.D., one of the preeminent psychologists and academic scholars of her era, deserves equal consideration as one of the field’s original maternal authorities. Her seminal text, Psychological Testing—first published in 1954 and subsequently translated into nine languages—is widely considered the definitive book in the field of quantitative psychology and remains required reading on college and university campuses everywhere.

Home-schooled as a child, Anastasi was fascinated with mathematics and taught herself a number of subjects, including spherical trigonometry. After two years at Rhodes Preparatory School in Manhattan, she was admitted to Barnard College at age 15. In 1929, she earned a doctoral degree in psychology at Columbia University. She later taught at Barnard College and at Queens College of the City University of New York before coming to Fordham University in 1947, where she remained for 38 years. In 1968, she was named chair of the Department of Psychology, a position she held for 11 years. Upon her retirement in 1979, she was named professor emerita and was awarded an honorary doctor of science degree.

Anastasi’s profound and lasting legacy of scholarship and teaching has enriched not only the field of psychology but also generations of psychology students and professors at Fordham. Through a series of generous gifts from her estate, the University has established both the Anne Anastasi Chair in Psychometrics and Quantitative Psychology and the Anne Anastasi Memorial Scholarship Fund, which provides fellowships for graduate students in psychology.